BASIC RULES OF THE BACKPACK

Here are some rules on the backpack.  The backpack featured here is the Arc’teryx Tango II.  I picked it because I feel that the shape of this backpack is the ideal.  I don’t have one (FAR too expensive) but it allows for the obeying of most of my rules.

Let’s look at that in a diagram:

As you can see, I try to keep the heaviest things on the bottom (red), the second heaviest just above it (orange) and the third heaviest on the top (yellow).  The lightest objects go on the outside (light green).  In a perfect world, this would be a durable, airtight sack of helium.  The other rule is that As the load gets higher, I keep it closer to my back.  A lot of backpacks will have fastener straps on the inside just opposite of where your back would be.  The reason for this is to fasten the heavier objects closer to your center of gravity.

The hip belt/strap rides along the top of your hips so most of the red should be above your hips, just opposite of the lower back.

LOOKING FORWARD FROM THE BACK 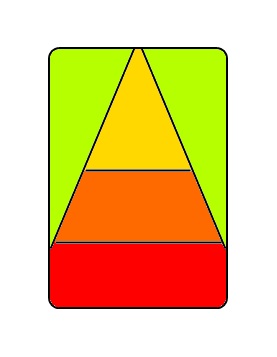 Again, heaviest at the bottom (red), the next (orange) just above it, and the lightest of the heavies above that.  The distribution forms more of a pyramid.  Don’t put the heavy stuff away from your center line if possible.  Just think of an object that would be the most stable (like a cone sitting on its circular base) and realize the rules of stability that govern that, also govern you.  Also remember that half of the cone (cut vertically) is you.

Debate Point: Weight on shoulders or hips?
Now this is a debate I’ve heard from time to time, and judging from my diagrams I’m sure you know which side I stand on this issue.  Let me ask a basic question.  Which part of your body was designed to carry weight?  The shoulder or the hips?  There you go.

Should my pack have a frame that keeps a gap between my back and the bag?
Depends on the terrain.  I’ve felt that the gap is more essential if in a hot and humid terrain like the tropics where it can get pretty miserable.

For those wanting outdoor life on the cheap, sometimes the most ideal gear is not available to you.  This is definitely me as well, so I decided to get a Fox Outdoor 3 Day Combat Pack.  Going at about $75, it seemed to be the cheapest, good quality backpack I could get that was not an ALICE pack (which can go for about half that price).

It’s certainly one of the bigger three day assault packs out there.  At 22″ x 17″ x 11″ it’s more than capable of carrying supplies that will not only last you three days, but even a week.

QUALITY AND DESIGN
Unfortunately, you do get what you pay for, and being half the price of bags of its equivalent, sometimes this shows.  For example, the stitching and construction quality itself is not top of the line and definitely not Mil-Spec.  You have to take good care of it.  If you yank on a strap while the bag is fully loaded, you’ll damage the stitching that connects it to the bag.  This is definitely a handle with care item.  The weight distribution of the pack is also less than ideal, so loads feel heavier than they really should.  That is probably the biggest weakness of this pack.
I’ve read a lot of reviews going on about the poor quality of the construction.  I agree to an extent, but some have claimed that the zippers came right off and the fabric just started ripping to shreds.  Either there is a huge quality consistency problem (where I just happened to luck out and get a half decent one) or they’re just not taking care of a cheap piece of equipment well enough.  Most of these reviewers emphasize that it’s made in China, but I’m pretty sure many of their favorite brands and models are as well.

HIGH POINTS
The good news is that as long as you don’t start to exceed 40 lbs this bag seems to do its job quite well.  And the two advantages it does have over ALICE packs are the MOLLE loops (for canteens and IFAKs) and large pocket openings for ease of access.

VERDICT
Although it’s not a case of “avoid at all costs” I am somewhat hesitant to recommend it to people because of the number of bad things I’ve heard about it and because of it’s very poor weight distribution.  However, I have been able to make it work for me with a little effort and care.  Although this is not a pack I’d bring to war, it is something I would bring to a long weekend hike and camp out.
I would say that it is inferior to an ALICE pack in most ways except that access to items are much easier with this pack than on most ALICE packs.

2 Responses to Back Packs